Body image has been something I’ve struggled with… pretty much my whole life. Because I have a pair of X-chromosomes, and that’s kind of how we roll, for the most part.

And then I got pregnant.

And then it was a girl. 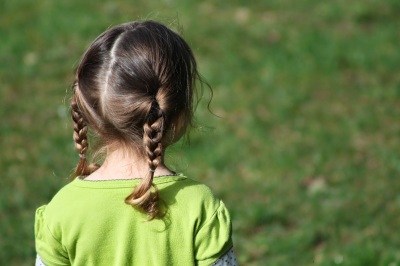 And I started thinking about the things I want for her. What I want her to think about her body and her self.

I want her to know she’s pretty, but that pretty’s not really the point.

I want her to have a healthy relationship with food. To eat and enjoy what is good, but to view it as fuel, not medication.

I want her to believe that being active and alive is fun, not something to punish yourself with when you’ve eaten too many cookies.

I want her to know that this body she’s been given is the thing that carries her beautiful self around in, and it’s the only one she has, and that it’s worth loving and taking care of, just because it allows her to be.

There are some things I’m not sure I would’ve learned if God hadn’t blessed me with girls. I was talking about it with my sister (expecting her first- a daughter- this summer)… It changes how I think of things. I have to be on top of the things I say about my body, because that is how they will learn to think of theirs. Mine don’t miss ANYTHING. I made one offhanded comment about the shape of my backside several months ago. Nothing derisive or anything, just a statement of fact about how pants don’t really like to stay up. (I believe my words to my youngest sister were “I don’t really have a butt, so it’s kind of like trying to belt pants on the bottom third of a ball.”) Forty-eight hours later, my oldest (then two) repeats it back to me. (“Mama, I don’t have a bum. Just a ball.”) Oops.

I know there are women who learn these things without daughters. And I know there are plenty of women with daughters who have yet to learn. But it’s been so transformational in my words and head and heart that I feel like I should share some of these bits with you:

The words you say about your body matter.

I knew I would have to curtail any use of the f-word in their presence. (“Fat.” What were you thinking?) But it’s hard to say bad words in your normal life while omitting them under certain circumstances. Best to limit any verbal body negativity, period. And it’s hard to do that when it’s all inside your head. This brings a much more difficult fight. And it’s not one that I’ve won yet. But the things you think become the things you say, and it’s totally a battle worth fighting.

And you know what? Mitigating the “you suck” body talk in my head has actually made me a healthier person.

I’ve medicated with food for as long as I can remember. Sad? Eat some chocolate. Stressed? Time for something crunchy. Happy? Proud of yourself? Celebrate! That means ICE CREAM! Bored? Om nom nom. I can register hunger and fullness, but only barely, and not without some work. But you know what? The kids eat what they want to eat. (Well, from the offered choices. I don’t let them eat whatever they want to eat, because that would be mayhem. Yesterday the older one figured out that she could get to the ice cream and… yeah.) And they stop when they’re not hungry anymore. They don’t possess any compulsion to eat the food until it’s gone. And yes, they have a tendency to eat out of boredom (working on it), but neither of them asks for a marshmallow when they get hurt or upset… sad isn’t connected with food. (Because, seriously, why would it be? That’s really something we make up.)  That’s how I want them to stay. Food is to be enjoyed because it’s good, and it gives you energy to play and get into mischief. That’s all. It doesn’t fix your feelings. Also? There aren’t “bad foods” and “good foods.” (Well, I mean, clearly ice cream is good, but we won’t demonize fat or carbs and we won’t force broccoli, besides making them try whatever is given.)

Exercise is to make Mommy “healthy and strong.”

They see me exercise from time to time. Not often, because it’s really hard to get a workout in with the under-three crowd needing “Up!” all the time. But it happens. And when it does, this is the explanation I give. There’s no “skinny.” There’s no “losing weight.” I would love for them to go as long as possible without these thoughts in their little heads. And you know what? It’s true. It’s really true for me- I spent years doing multiple workouts a day with no discernible change in weight. Exercise gives me the ability to go live my life with more strength and energy. Anything else it does is gravy.

Being active is just what we do.

I’ll admit, this is a weak point. I hate getting them into their snow gear. HATE. IT. So in the winter, they’re not as active as I’d like them to be. In the summer? Playgrounds four days a week. Five. Climb that thing, run around that other thing, play in the rocks. I’m hoping to start biking with them this summer. Admittedly, at two and three, that won’t be activity for them, just a lot of work for me. But they’ll see this is how we live. And it’s fun.

My body is a gift.

Seriously. I spent almost three decades thinking my body was a total lemon, what with my slow metabolism and whatever. But you know what? Without it, I’m dead. Really. That’s all. I can waste time bemoaning its shape or size or energy level, but in reality, I’ve been blessed with a relatively healthy body. It grew a couple people and is strong enough to carry them (and me) around all day. I’m not typically sick. I’m generally strong. And I am alive. I get to go about my regular, mundane life, enjoying little things like coffee and flowers and snowfall and sun. Whatever the size or shape of my body, I need it to do all of that. And yeah, that makes it worth taking care of. Giving it quality fuel and making it “healthy and strong” with exercise and activity as best I can.

These aren’t things I can really tell my little girls and hope that it takes.

I have to live it. I have to be it. And it takes plenty of effort to become what I need to become in order for them to have a relatively healthy relationship with their physical selves, but it’s worth it, both for them and for me. And for you. With or without daughters.