The moon was low over the ocean and nearly full, shining like a spotlight on the water.

No, really. Like a literal spotlight on the water, with a huge bright patch out toward the horizon. I’d never seen anything like it before, to be honest. Possibly because I live in the state with the most coastline (by far) but smack in the middle, so I’m 6 hours from any ocean. I’ve since noticed the sun does a similar thing toward sunset (and probably just past sunrise, if I were East-facing) but it seems cooler when everything else is dark.

Two mornings ago, I was driving to coffee around 6 and couldn’t miss this sight down the hill. It made me want to cry, honestly. And I’m not typically much of a crier. (Please don’t try to verify that with my husband- his definition of “crier” isn’t especially generous.) I’m not sure if I was feeling a little weepy from the beauty or from the panic that comes with the inability to keep it… I had no camera besides my phone with me, and I knew I’d never do it justice, even with the best gear.

But, again, wonder. Curiosity and awe. The awe was there, but I was curious what I’d catch if I gave it a go. So yesterday, I went down with my camera around 6. The moon was a little higher and smaller, so the effect was less dramatic, but it was actually full and still beautiful. 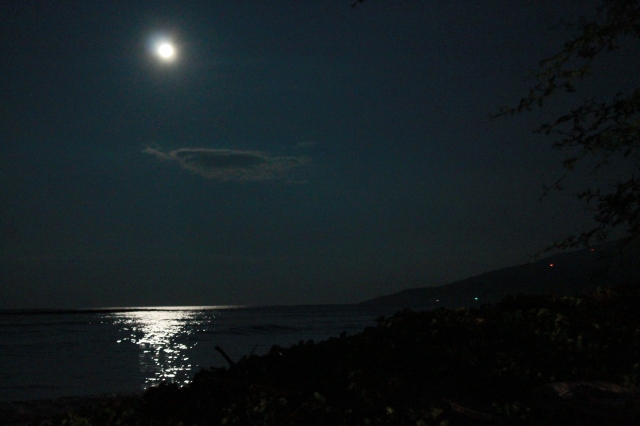 Looking at it now, it’s not a terrible shot, I suppose. Not especially stunning, but certainly could be worse.

But if you’d seen it, you’d know how completely disappointing this is. The scene was glorious. This is… ok.

I went to coffee pretty irritated with myself, actually. I wish I’d brought a tripod. (I used the corner post of a gate to steady the camera for the long exposure.) I wish I had a remote shutter release so I didn’t bump the camera when I pushed the button. (A friend asked last night why I didn’t just use the timer. …Because I didn’t think of it, that’s why.) My training and experience is limited. I could probably have done slightly better with a full-sized sensor and a lens that costs more than my first car, too. But even if we solved all those problems, there’s really no way I could’ve done justice to the glory God was painting for just anyone who was up early and near the ocean to see.

For all have sinned and fall short of the glory of God.

The word “sin” has archery origins… it’s missing the mark. Not a perfect bull’s eye. To be clear, to take this verse and apply it directly to photography is a terrible mishandling of Scripture. But I was so acutely aware of my complete inability to capture the glory I saw, and it was a vivid picture to me of just how much I cannot, under any circumstances, in any way, ever be good enough to “deserve” anything good from God.

It isn’t about the good outweighing the bad.

I just can’t get there from here.

But I can’t, in good conscience, quote Romans 3:23 that way. That isn’t what the verse says. Punctuation matters.

for all have sinned and fall short of the glory of God,

That’s what the verse says. The first letter isn’t the beginning, and there is no period at the end. Romans 3:23 is a fragment in the middle of one of Paul’s characteristically long sentences. Let’s look at the whole paragraph. (Better yet, the whole chapter or book, but for the sake of space, we’ll “think paragraphs” as the book I just read suggests.)

But now apart from the law the righteousness of God has been made known, to which the Law and the Prophets testify.  This righteousness is given through faith in Jesus Christ to all who believe. There is no difference between Jew and Gentile, for all have sinned and fall short of the glory of God, and all are justified freely by his grace through the redemption that came by Christ Jesus. God presented Christ as a sacrifice of atonement, through the shedding of his blood—to be received by faith. He did this to demonstrate his righteousness, because in his forbearance he had left the sins committed beforehand unpunished— he did it to demonstrate his righteousness at the present time, so as to be just and the one who justifies those who have faith in Jesus.

We’re all the same. We have all sinned. we do all fall short of God’s glory… And.

We can’t get there from here. But God sent a rescuer to make it possible. We’re “justified freely by his grace through the redemption that came by Christ Jesus.”

I’m still disappointed in the pictures I took yesterday. But I wonder if the inability of mere mortals to fully capture or reproduce God’s handiwork isn’t, at least in part, to point us to our need for grace. God makes sunrises, sunsets, gorgeous moons on oceans, little flowers that nobody ever sees… every day. And I can’t perfectly capture any of it. And, as good as some photographers and artists are, they can’t either. The very best efforts from the most talented people can’t quite match the kind of artistry God produces every day, all over the world. He’s totally other.

But also, He makes a way for us to be with Him.

It’s grace. (And somehow, even “grace” feels like too small a word. How can this be the same word that we use for saying “Thank you, Jesus, for this food, Amen.” before a meal?)

Is this new to you? Do you not know what I’m talking about?

This is a big freaking deal. I don’t know how else to say it. I know if “sin” and “redemption” and “Jesus” (in the proper sense, talking about a person) are not part of your regular vocabulary, a lot of this sounds like religious nuttery. But if I have your attention for just another second, I have to tell you about it. Not because I’m right and you’re wrong, but because eternity is a long time and I’d like to hang with you in Heaven for it. (Also, Heaven isn’t boring like the pictures of angels and harps.)

So… in a nutshell…

So are sin and hell.

Being “good enough” isn’t a thing. We seriously can’t get there from here.

But God loves you. And He wants YOU. (I know. That sounds ludicrous. But it’s true.) So He made a way for you to be with Him.

God is good. Perfect, in fact. And He has to punish sin, and that punishment is death. In a spiritual, forever, super sad and scary sense.

But Jesus (who is-and, again, I realize this makes not a lot of sense- God’s Son, and fully God) came to Earth, was punished for our wrongs, our inability to be perfect, and rose again, proving he wins over sin and death.

You don’t have to pay for all the things you’ve ever done wrong! Yay!

So… Here’s all there is to it: talk to God. Tell him you know you’ve missed the mark and can’t be good enough. Ask him to take away your sins and save you. He gives you the Holy Spirit. (Some more crazy: also God. The third person of the Trinity. One God, three distinct persons. No, I don’t really get it, either.) The Holy Spirit makes it possible for you to follow Jesus and do what he says (though still imperfectly, for now.) Since God created us, living the way he recommends is actually the recipe for the fullest, most abundant life, so, while this might look like a loss, it isn’t.

More questions? I don’t blame you. I don’t explain it especially well. (More evidence of my ineptitude at capturing.) Talk to a friend who loves Jesus and believes the Bible is true. Or talk to me. I’d love to discuss it more with you, if this is something you’re interested in learning more about.