I don’t remember exactly how she told me. Maybe her firstborn (just barely one then) wore a “big sister” shirt. Maybe, across half the world over FaceTime, she just gave me the wide-eyed excited-but-this-is-crazy face and told me over, “Guess what! I’m PREGNANT.” Either way, I was excited for her. We had both been awaiting positive pregnancy tests for a few months, both hoping for a close sibling pair—her first and second, my third and fourth. Her baby was a few months older than my youngest, so it made sense that she’d have news to announce first. I started dreaming about perhaps flying to Czech to see her when her baby arrived late the following April, providing I didn’t get pregnant too soon.

I did. It was literally days later when I got the faintest second pink line. But this was not my first pregnancy. I knew: a faint positive is a positive. She was one of the first people I told. We figured our due dates were perhaps a week apart. “Cousin twins!” we excitedly declared them.

And that April, she gave birth to her Sophia, and I was six months pregnant with my Lilly. There were no cousin twins. That pink line flickered and went out over the next few weeks, then my body let the baby go. That April was a weird mix of feelings: excitement at the pending birth of my niece, sadness that there was no corresponding birth for Hope, Sophie’s “twin,” and guarded anticipation of the baby girl I was finally beginning to feel moving within.

Every year, I expect grief as I pass the anniversary of the loss, and every year I’m surprised to find the anniversary is over with little feeling. I guess I see it—the prevailing symptoms of my grief when I lost her were numbness and lethargy (which turned out to be depression). I only recall crying twice that Fall; I just remember sitting in the recliner in my living room, trying to muster up a few craps to give about my three little kids’ misbehavior, and feeling generally catatonic.

I’m never quite sure what to do with it. It has taken me by surprise for a third year. I remember people telling me when I became pregnant with Lilly that a rainbow baby is the best medicine for a miscarriage. My truth is a little more muddled than that. I’ve written before about the work it took to fully love Lilly and Hope simultaneously, because wishing Hope here means basically wishing Lilly gone, and celebrating Lilly means I’ve let Hope go.

To some degree, this remains.

But April is a sweet month for me, too. I’m finding that, like the last two, Jesus is holding me close and quiet. The grief stings, sure. But to borrow a lyric from Andrew Peterson,

The aching may remain, but the breaking does not.

The grief means she’s not forgotten. It reminds me she was here. Miscarriage is weird—life moves on like it never was, when a mama is acutely aware of the lack of a human in her body, in her family. But April reminds me she was here, and her name reminds me (as I had hoped it would) that she’s not lost, she’s just gone. I know where she is, and I will get to love Hope beside Lilly eventually.

Friend, I don’t know what your story is. I know there’s a good chance you have one like mine, or eventually you may. I promise you know people who hold little ones in their hearts that few others remember.

If this is your story, I hope you find comfort in the sadness, as I am. I hope Jesus holds you close in the sorrow and the quiet. That the aching remains, but the breaking does not.

Because the Man of All Sorrows, He never forgot
What sorrows were carried by the hearts that He bought
So when the questions dissolve into the silence of God
The aching may remain, but the breaking does not.

If this is you or someone you love, I want to point you to a book I’m reading right now. It’s due out 5/1/2018 (so just in time for the potentially oh-so-painful Mother’s Day!) and it’s called Grace Like Scarlett. I’ll probably share more about it when I’m done, because I believe from the depths of my soul that this book is one that the world needs, but for now, I’m about a third of the way through it, and I’m experiencing it just like April: the sorrow is quiet and deep, and the presence of Christ is palpable and deeper still.  If you’re interested in checking it out, you can find it here. 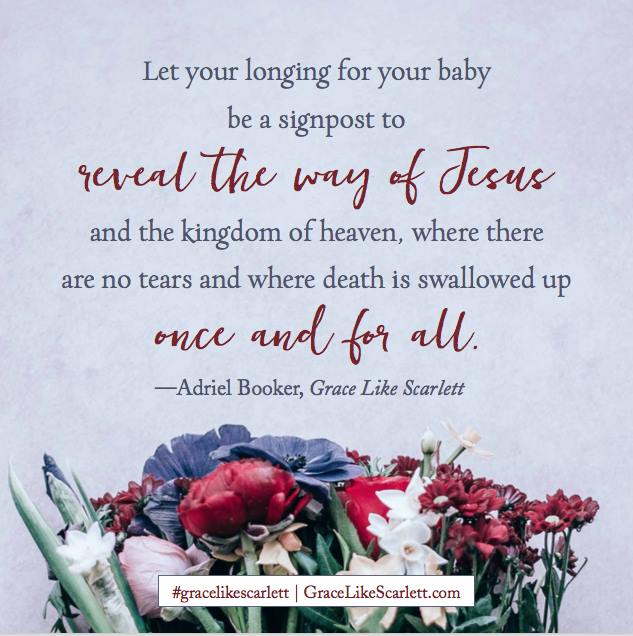