So… do you remember that time I whined loudly on facebook about the grammar of the entire Internet last week? It went something like this:

Are we being punked? It feels like the entire internet did a search and replace and every “your” is now “you’re” and every “their” is now “they’re.” I’m looking up verses on multiple sites and every single translation that has either “your” or “their” has it wrong. YOU CAN’T DO THAT TO THE BIBLE. (Also, every blog post, magazine article, and news story I clicked on last night while waiting for kids to sleep had issues with those words.)

Too early for April Fools’ Day. What in the world?

Let me back up a little.

I’ve been a bit of a grammar nazi for most of my life. I try not to be obnoxious about it, but I generally notice errors. A couple weeks ago, I started seeing them in places that they really shouldn’t be. Places that should know better, like my email’s news site and Intuit.com (think Turbo Tax and Quicken.) 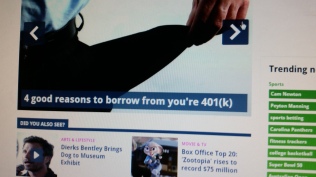 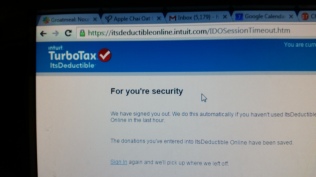 I took crappy cell phone pictures and sent very ragey texts to my sweet husband, who completely understands my hatred of misused apostrophes. The one that really killed me was this one: 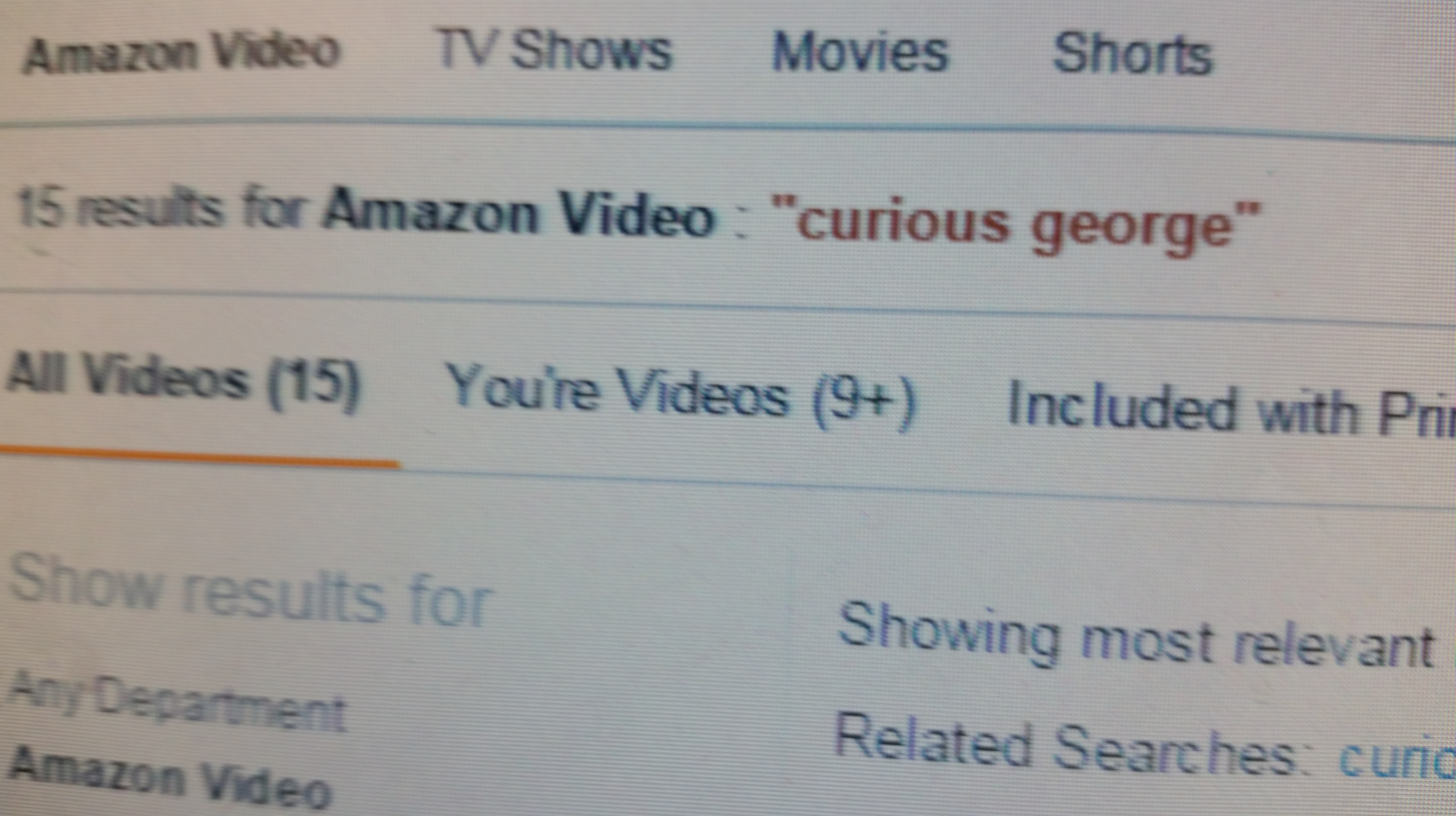 Somehow this hit me as the worst kind of bastardization of the language. If anyone should be able to afford editors that know what they’re doing, Amazon should. I don’t know. It made me SO MAD.

But I kept it inside.

For a little while.

And then last week, I was writing a post about my (then) upcoming ultrasound and all my crazy fears. I was working so hard to point myself back to the One who can calm those fears (and who commanded me to “fear not.”) I had some verses in mind, but I try to link to Bible sites so that you can check my hermeneutics if you want to. I don’t ever want you to take my word for it when you could instead take His.

And when I went to both biblehub.com and biblegateway.com (my go-to sites), both of them had your/you’re, they’re/their/there and it’s/its problems in every single instance and every single translation. I lost it. And by “lost it,” I definitely mean “posted a very angry rant on facebook.”

A couple days later was date night. Andrew and I had a lovely time out, and on the way home, I finally remembered to ask him about it. “Did you do something to the internet?”

Yes. Yes, he did. Apparently, my loving husband found (as in went looking for, not stumbled upon) some Chrome extension that switched every usage of its/it’s, your/you’re, and rotated uses of there/their/they’re. (Also replaced every use of “less” with “fewer,” which I didn’t come across.)

In that moment, I wasn’t sure whether his ability to punk me in the most subtly effective way possible was evidence that he was the best husband in the world or the worst.

In either case, it was pretty clear that a counterattack was required.

Many months ago, I stumbled across an Instagram photo of someone’s color-coordinated bookshelf. I thought it was beautiful. I also knew that it was strictly out of the question in my house. Andrew would go insane. He’s touch color blind, and he organizes things by category in his brain (and certainly not by color), so he’d never find anything.

So, naturally, I laughingly showed him the picture, with the qualification that of course I knew this would never, ever happen in our house because he’d hate it.

He nearly made me sleep on the couch for “impure thoughts about the bookshelf.” (He was kidding. But only kind of.) 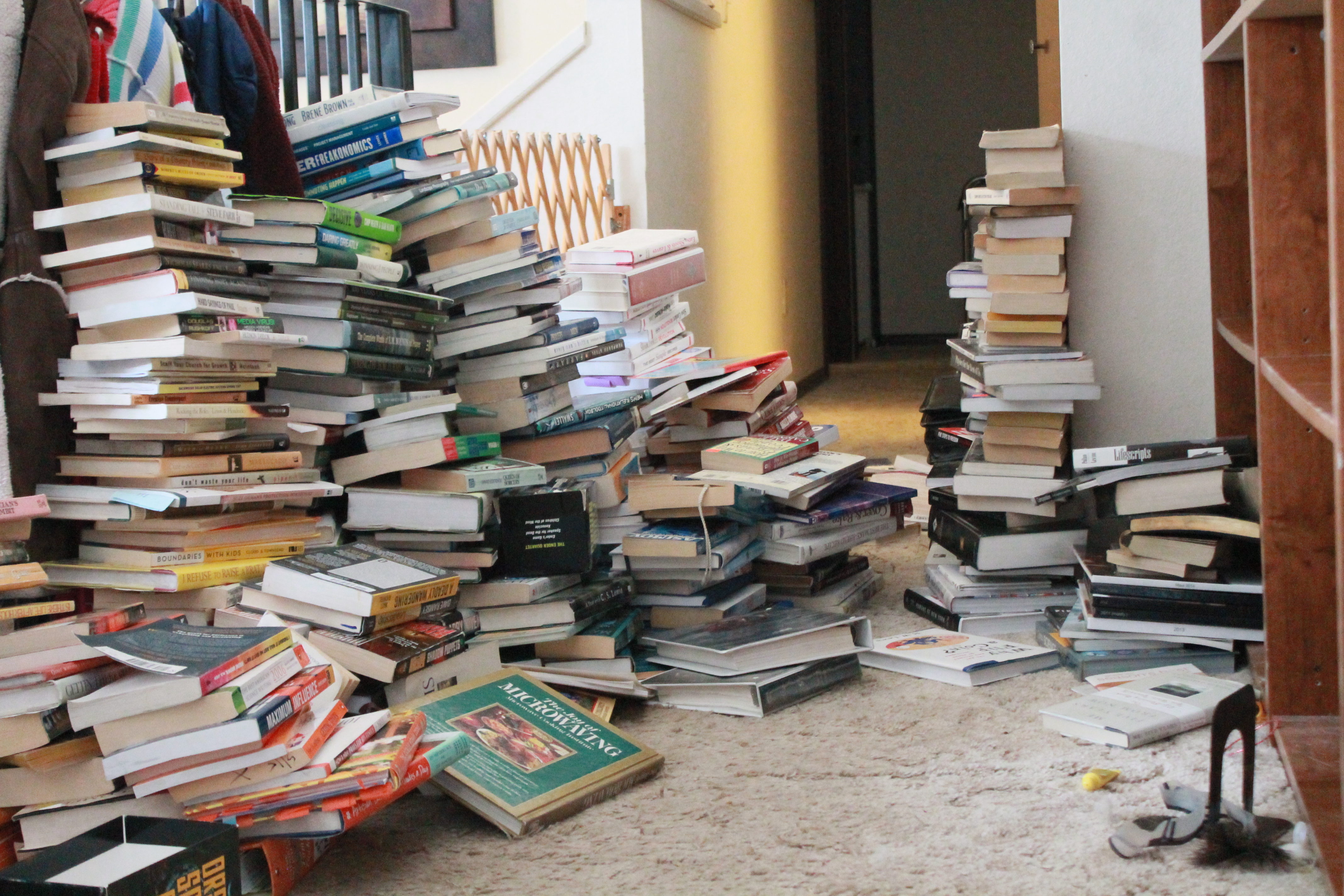 I picked a day I knew he’d be out late and went to work. The girls gleefully helped (I definitely just told them I was reorganizing, not that I was messing with Daddy) and we spent ALL. DAY. We have nearly 40 feet of shelf there, and a fair bit was stacked two deep.

(And, yes, I notice how nerdy it sounds that my husband and I have prank wars involving bad apostrophes and bookshelf organization.)

We sorted, we cleaned. It was a crazy mess, and it cut off access to the bathroom. (Whoops.) I even called in backup from a local “move a body” kind of friend. (As it turned out, I did finish just before she came, so we just got to hang out. Win!)

At one point, Jenna decided it was way too dusty and insisted on a dust mask, which she made with string and a styrofoam cup: 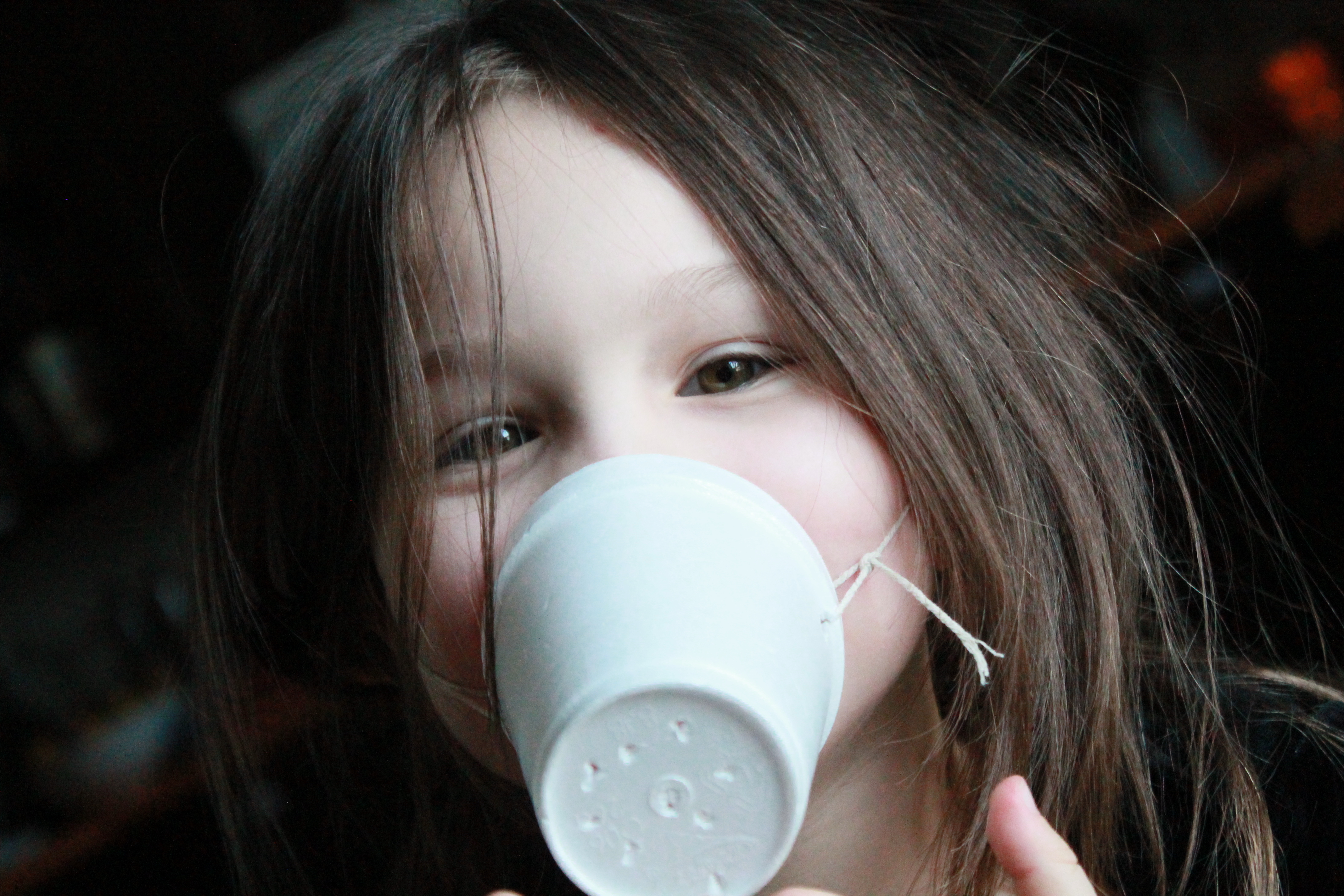 The girls loved it. Jenna gushed on and on… “It’s so pretty! Daddy’s going to be so surprised and SO pleased!!!” Oh, he’s gonna be surprised! 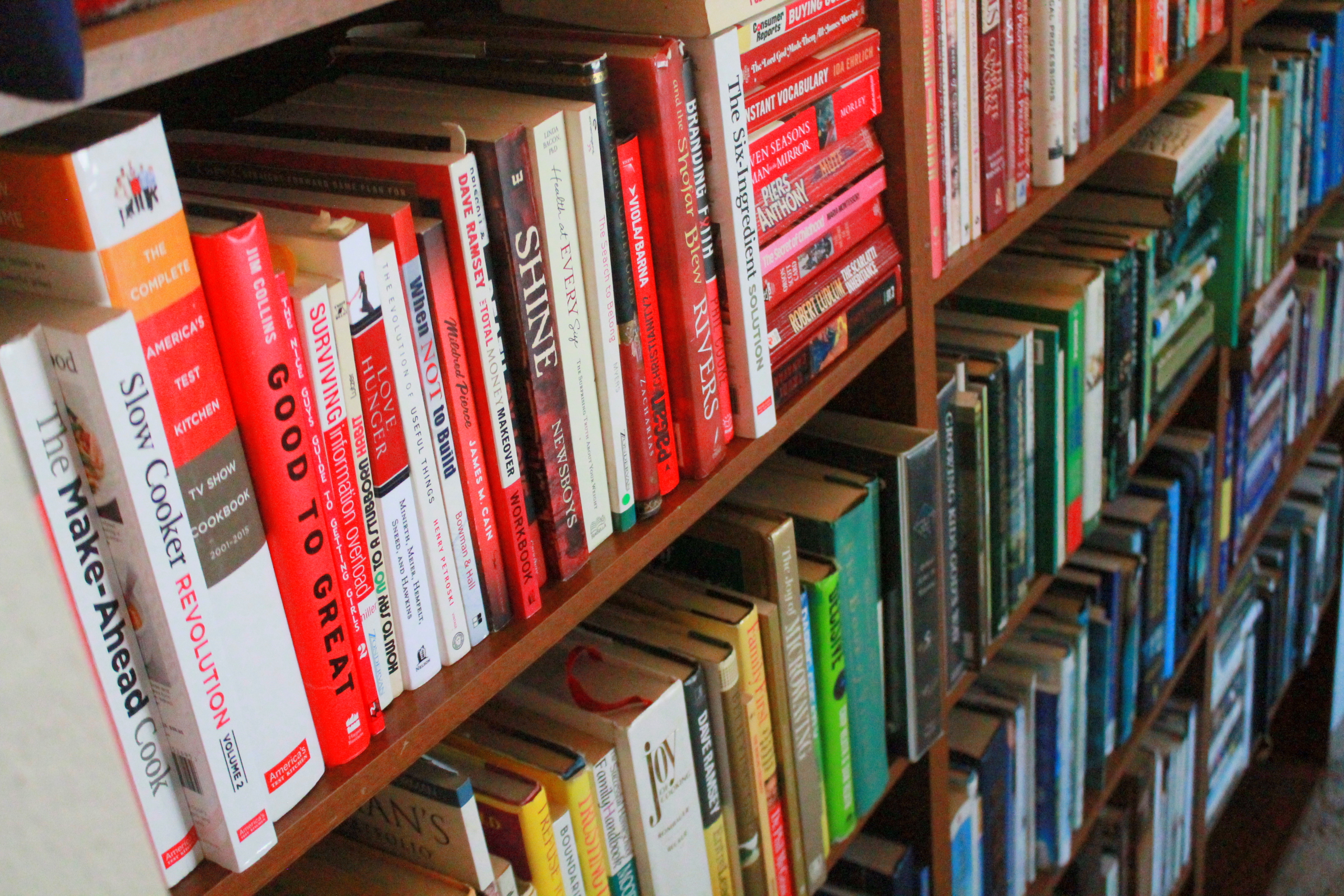 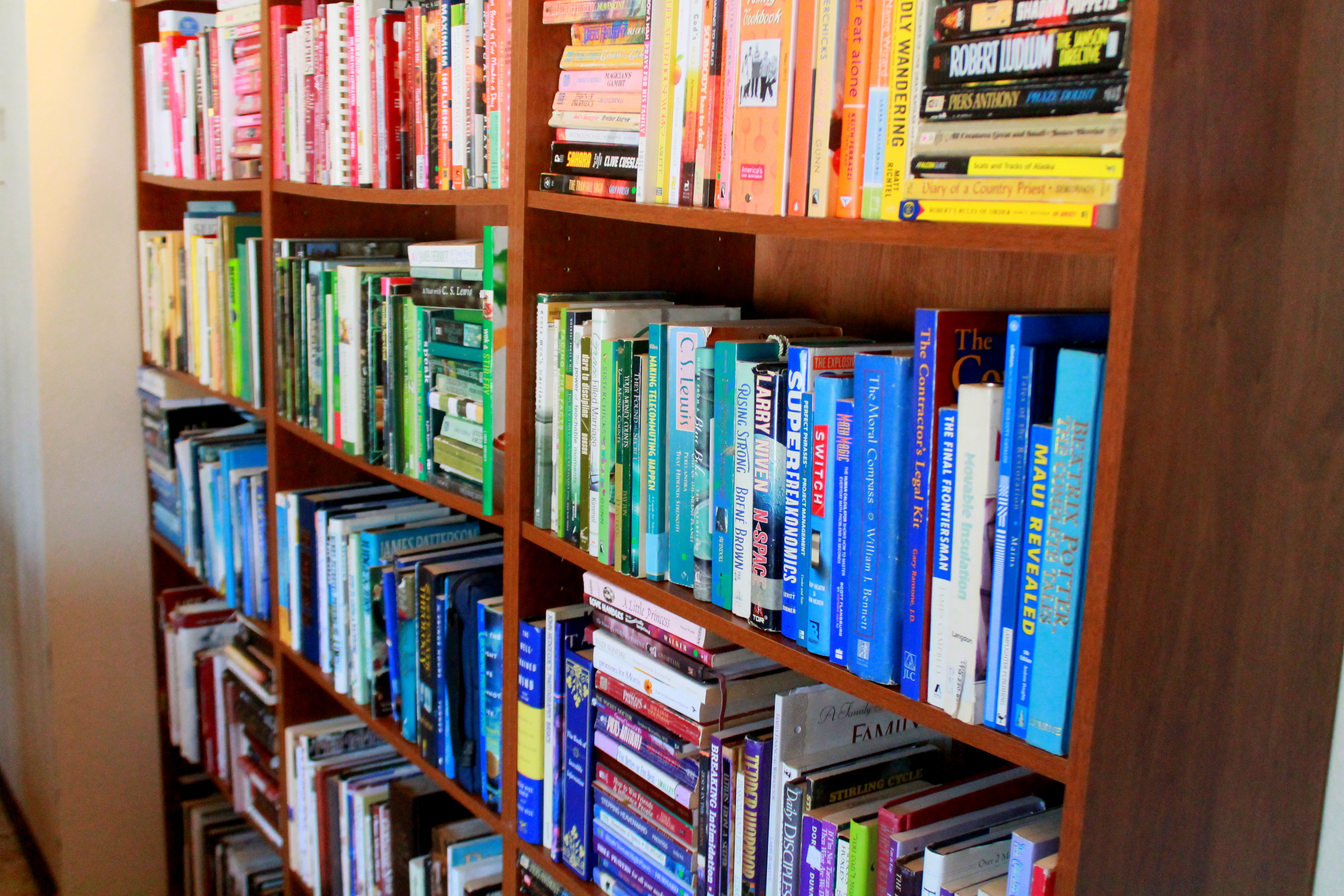 Now… we have a rule in our house that you can’t pull any pranks you’re not willing to help clean up, so this actually represents a tw0-day commitment to the silly bookshelf. (But I love my husband, so it really won’t stay.) (Andrew: if you’re reading, weekend after Easter?)

So I got done, put kids down, cleaned things up, and awaited his arrival.

10:30 pm, Andrew walks through the door. He takes a few minutes futzing with the fire, then he looks up. “What did you do to my bookshelf???”

I answer, with a very satisfied smile, “Y-O-U-R welcome.”

He thinks for a beat. I’m pretty sure I see it all register. “…You suck.”

And that, my friends, is love in real life.

This post is part of my series, 31 days of speaking the truth. You can find the whole list of them here on the first post of the series.
﻿

Robin Chapman is a clumsy Jesus follower, imperfect wife and mom, normalizer of failure, and writer who captures both the gritty experience of motherhood and the grace of God as it carries her despite her (many) imperfections. Her writing is laced with humor and vulnerability, sure to make you laugh and breathe a sigh of relief, knowing you are not alone. As an editor and writer for KindredMom.com, she is a cheerleader for moms in the trenches. She educates her four children at home in Alaska, where she lives with her ridiculously good looking husband, Andrew. View more posts